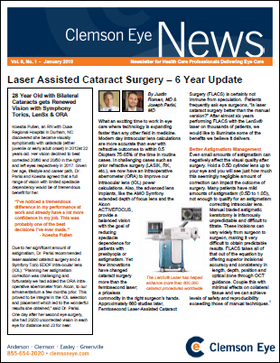 Koesha Pullen, an RN with Duke Regional Hospital in Durham, NC discovered she became visually symptomatic with cataracts (either juvenile or early adult onset) in 2012at 22 years old. Her vision declined to best corrected 20/60 and 20/50 in the right and left eyes respectively in 2017. Given her age, lifestyle and career path, Dr. Parisi and Koesha agreed that a full range of vision with limited spectacle dependency would be of tremendous benefit for her.

“I’ve noticed a tremendous difference in my performance at work and already have a lot more confidence in my job. This was probably one of the best decisions I’ve ever made.”
– Koesha Pullen

Due to her significant amount of astigmatism, Dr. Parisi recommended laser-assisted cataract surgery and a Symfony Toric EDOF intra-ocular lens (IOL). “Planning her astigmatism correction was challenging and fortunately we had added the ORA intra-operative aberrometer from Alcon, to our armamentarium a few months prior. This proved to be integral in the IOL selection and placement which led to the wonderful results she obtained,” said Dr. Parisi. One day after her second eye surgery,  she had 20/20 uncorrected vision in each eye for distance and J3 for near.

What an exciting time to work in eye care where technology is expanding faster than any other field in medicine. Modern day intraocular lens calculations are more accurate than ever with refractive outcomes to within 0.5 Diopters 75-85% of the time in routine cases. In challenging cases such as prior refractive surgery (LASIK, RK, etc.), we now have an intraoperative aberrometer (ORA) to improve our intraocular lens (IOL) power calculations. Also, the advanced lens implants, like the AMO Symfony extended depth of focus lens and the Alcon ACTIVEFOCUS, provide a balanced vision with the goal of reducing spectacle dependence for patients with presbyopia or astigmatism. Yet few innovations have changed cataract surgery more than the femtosecond laser; a priceless commodity in the right surgeon’s hands.
Approximately 660 studies later, Femtosecond Laser-Assisted Cataract Surgery (FLACS) is certainly not immune from speculation.  Patients frequently ask eye surgeons, “Is laser cataract surgery better than the manual version?” After almost six years performing FLACS with the LenSx® laser on thousands of patients, we would like to illuminate some of the benefits we believe it delivers.

Better Astigmatism Management
Even small amounts of astigmatism can negatively affect the visual quality after surgery. Hold a 0.5D cylinder lens up to your eye and you will see just how much this seemingly negligible amount of correction can impact the outcome of surgery. Many patients have mild amounts of astigmatism (0.5D to 1.0D), not enough to qualify for an astigmatism correcting intraocular lens. Manual bladed astigmatic keratotomy is infamously unpredictable and difficult to titrate. These incisions can vary widely from surgeon to surgeon, making it very difficult to obtain predictable results. FLACS takes all of that out of the equation by offering superior incisional accuracy and consistency in length, depth, position and optical zone through OCT guidance. Couple this with minimal effects on collateral tissue and we can achieve levels of safety and reproducibility exceeding those of manual techniques.1

Capsulotomy Accuracy, Precision, and Lens Centration
FLACS has been shown to consistently create a regularly shaped, well-centered and ideally sized capsulotomy, one of the most challenging aspects of cataract surgery, offering better IOL/capsule overlap when compared to manual techniques.2,3 This is associated with less lens tilt,4,5 and fewer internal aberrations,5 which may result in improved optical quality.5 Tilting of the lens induces a considerable amount of coma-like aberrations.6 In fact, poor positioning is one of the main indications for removal, exchange, or repositioning of a posterior chamber IOL.7 It is also apparent that capsulotomy size may influence visual outcomes. In a comparison of 6.0 mm versus 5.5 mm capsulotomies, vertical and horizontal tilt was significantly higher in the 6.0 mm group than in the 5.5 mm group.8 Such subtle adjustments are not possible without FLACS. Ultimately, consistent capsulotomy size leads to better predictability of refractive outcomes by decreasing one of the variables of effective lens position.

Less Energy & Time Inside the Eye
LenSx® lens fragmentation has been shown to decrease the time and energy required for the cataract removal by phacoemulfication 50-80% compared to manual techniques.9,10 There is also evidence that this leads to a significant reduction of endothelial cell loss and corneal edema11,12, making it attractive in not only routine cases, but especially in patients with endothelial dysfunction such as in Fuch’s dystrophy.

Improved Incision Integrity
An Ideally shaped incision for cataract surgery has a tri-planar geometry. Their enhanced sealing and healing are associated with lower rates of wound leaks and could theoretically reduce infection rates when compared to bladed incisions. However, the incidence of endophthalmitis is so low that it is hard to show a statistically significant difference. All surgical wounds induce a small amount of astigmatism. The architecture of the FLACS incision has high reproducibility in the induction of astigmatism that cannot be achieved with manual keratomes,13 which helps produce more reliable formulas and more predictable outcomes.

Aids Complicated Cataracts
FLACS has been successfully employed in cases where the zonules are likely weak and there is an essential need to minimize manipulation of the lens during surgery in order to reduce the chance of further intraoperative complications. This is critical in post-traumatic cataracts after blunt trauma or a penetrating injury as well as in pseudoexfoliation syndrome. White or highly dense cataracts are also of particular interest in order to minimize the amount of energy required to remove these cataracts.

Patient Financial Option
Clemson Eye was one of the first practices in the country to offer Femtosecond laser-assisted cataract surgery in 2012. As such, we have experience with thousands of cases ranging from astigmatism treatments and use in full focus IOL designs to complicated cataract surgeries such as mature cataracts and those following trauma. The benefits in these cases are evident to us and our patients on a daily basis.

Since 2005, CMS has allowed patients to pay the difference, from what Medicare (and private payers) covers. Patient education begins with the referring doctor. During the surgical consultation, patients are provided with educational materials to make the best decision for their lifestyle. Reassurance is provided that basic cataract surgery will provide an excellent result should they select the fully-insured option. At Clemson Eye, generally 35-50% of patients chose an advanced option because they want the benefits that technology offers and less dependence on eyeglasses.

Ultimately, there is a growing body of literature supporting the observations of improvements in astigmatism correction, precise IOL positioning, less harm to the corneal endothelium and corneal incision integrity with the use of laser-assisted cataract surgery. It is exciting for a surgeon to be able to offer patients so many great options. The technology continues to evolve rapidly and we believe its full potential is yet to be fully realized.