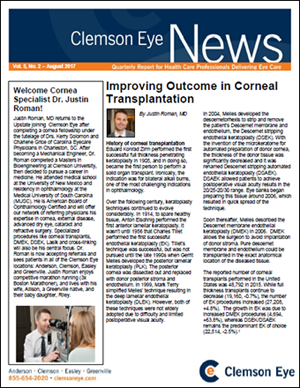 Eduard Konrad Zirm performed the first successful full thickness penetrating keratoplasty in 1905, and in doing so, became the first person to perform a solid organ transplant. Ironically, the indication was for bilateral alkali burns, one of the most challenging indications in ophthalmology.

Over the following century, keratoplasty techniques continued to evolve considerably. In 1914, to spare healthy tissue, Anton Elschnig performed the first anterior lamellar keratoplasty. It wasn’t until 1956 that Charles Tillet performed the first successful endothelial keratoplasty (EK). Tillet’s technique was successful, but was not pursued until the late 1990s when Gerrit Melles developed the posterior lamellar keratoplasty (PLK). The posterior cornea was dissected out and replaced with donor posterior stroma and endothelium. In 1999, Mark Terry simplified Melles’ technique resulting in the deep lamellar endothelial keratoplasty (DLEK). However, both of these techniques were not widely adopted due to difficulty and limited postoperative visual acuity.

In 2004, Melles developed the descemetorhexis to strip and remove the patient’s Descemet membrane and endothelium, the Descemet stripping endothelial keratoplasty (DSEK). With the invention of the microkeratome for automated preparation of donor cornea, the thickness of the donor tissue was significantly decreased and it was renamed Descemet stripping automated endothelial keratoplasty (DSAEK). DSAEK allowed patients to achieve postoperative visual acuity results in the 20/25-20/30 range. Eye banks began preparing this tissue around 2006, which resulted in quick spread of the technique.

Soon thereafter, Melles described the Descemet membrane endothelial keratoplasty (DMEK) in 2006. DMEK allows the surgeon to avoid implantation of donor stroma. Pure descemet membrane and endothelium could be transplanted in the exact anatomical location of the diseased tissue.