Diabetics should get yearly eye exams to protect their sight 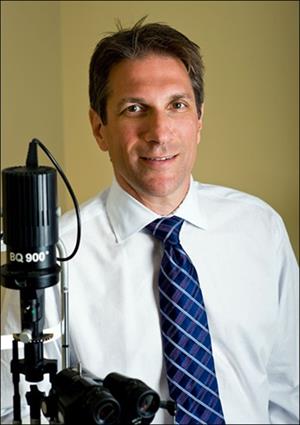 Diabetics should get yearly eye exams to protect their sight

When was your last eye exam? If you’re a diabetic, there’s a 60 percent chance you haven’t had an eye exam this year. And that’s risky behavior, since diabetes has many vision-robbing consequences that even those coping with the disease may be unaware of. Although diabetes is the leading cause of new blindness in adults, most conditions can be effectively treated or even prevented with early diagnosis.

November is National Diabetes Awareness Month, so we are hearing a lot about healthy weight, diet and exercise.

Diabetic retinopathy has multiple stages of severity. In the mild-to-moderate stages, swelling (called microaneurysms) occurs in the retina’s tiny blood vessels. This can leak fluid into the retina. As the disease progresses, tiny blood vessels can close off and lose their ability to transport blood to the retina. In the severe, nonproliferative stage, more blockages occur, depriving the retina of its blood supply. And in the advanced “proliferative” stage, new, weaker blood vessels can form, eventually leading to bleeding, scarring, retinal detachment and permanent vision loss.

A further complication is diabetic macular edema (DME). This is a buildup of fluid in the region of the retina that is responsible for fine, detailed central vision. The macula is critical for reading, recognizing faces and driving. According to the National Institutes of Health, about half of all diabetics with diabetic retinopathy will develop DME, the most common cause of vision loss among diabetic patients.

Close monitoring and good blood glucose control are important in reducing the risk of diabetes-related eye disease. Retinopathy may require treatment with laser or injected medications to maintain vision.

Diabetes a prolific disease in state and region

In the Upstate, the disease is even more prevalent. The average rate of the seven Upstate counties (Greenville, Spartanburg, Pickens, Oconee, Anderson, Laurens and Union) is a concerning 13 percent.

And the scope of the disease nationally continues to grow. Thirty-seven percent of adults over and 51 percent of seniors have been diagnosed with pre-diabetes and are at high risk. Another 8.1 million people, nearly 28 percent of the population, are estimated by the CDC to be undiagnosed. Additionally, the number of children with Type 2 diabetes is growing, a direct correlation with the epidemic of obesity in the United States.

Eye exams are the best defense

So back to eye exams. Regular eye exams are important for all of us, but they are critical for patients at risk of, or already diagnosed with, diabetes. No treatment or medical advance can regain vision once it is lost. Yet statistics show 40 percent of diagnosed patients in South Carolina do not get an annual eye exam.

As the prevalence of diabetes grows, regular examinations are the best defense against diabetes-related vision loss. An annual eye exam that includes dilation by an eye doctor can detect early signs of these conditions and be a critical first step in developing a treatment plan that preserves and protects vision.

Dr. Joseph Parisi is the medical director and chief ophthalmologist at Clemson Eye. He is certified by the American Board of Ophthalmology and is a fellow of the Royal College of Surgeons of Canada and of the American College of Surgeons. He has performed more than 20,000 cataract, refractive and microsurgical procedures using the most advanced technology and techniques available.