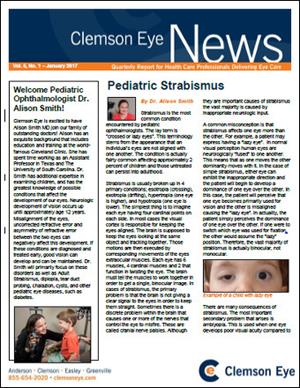 Strabismus is the most common condition encountered by pediatric ophthalmologists. The lay term is “crossed or lazy eyes”. This terminology stems from the appearance that an individual’s eyes are not aligned with one another. The condition is actually fairly common affecting approximately 2 percent of children and those untreated can persist into adulthood.

Strabismus is usually broken up in 4 primary conditions; esotropia (crossing), exotropia (drifting), hypertropia (one eye is higher), and hypotropia (one eye is lower). The simplest thing is to imagine each eye having four cardinal points on each side. In most cases the visual cortex is responsible for keeping the eyes aligned. The brain is supposed to keep the eyes looking at the same object and tracking together. Those motions are then executed by corresponding movements of the eyes extraocular muscles. Each eye has 6 muscles, 4 cardinal muscles and 2 that function in twisting the eye. The brain must tell the muscles to work together in order to get a single, binocular image. In cases of strabismus, the primary problem is that the brain is not giving a clear signal to the eyes in order to keep them straight. Sometimes there is a discrete problem within the brain that causes one or more of the nerves that control the eye to misfire. These are called cranial nerve palsies. Although they are important causes of strabismus the vast majority is caused by inappropriate neurologic input.

A common misconception is that strabismus affects one eye more than the other. For example, a patient may express having a “lazy eye”. In normal visual human eyes are neurologically “fused” to one another. This means that as one moves the other dominantly moves with it. In the case of simple strabismus, either eye can exhibit the inappropriate direction and the patient will begin to develop of one eye over the other. In this case, the patient will perceive that one eye becomes primarily used for vision and the other is misaligned causing the “lazy eye”. In actuality, the patient simply perceives the dominance of one eye over the other. If one were to switch which eye was used for fixation, the other would assume the “lazy” position. Therefore, the vast majority of strabismus is actually binocular, not monocular.

There are many consequences of strabismus. The most important secondary problem that arises is amblyopia. This is used when one eye develops poor visual acuity compared to the fellow eye. Strabismus causes the brain to perceive double images because the eyes are not aligned on the same target. One can imagine a patient with esotropia who is looking straight with one eye and at their nose with the other. The brain perceives this mismatch and develops an ingenious coping mechanism called suppression. This allows the brain to shut off the eye that is looking in the inappropriate direction. This alleviates the patient’s diplopia, but the act of shutting something off leads to poor vision over a period of time.

“If strabismic amblyopia is not identified and appropriately treated in early childhood it can lead to permanent visual disability in adulthood.” Says Dr. Alison Smith, Pediatric Ophthalmologist at Clemson Eye.

Another visual problem that arises from strabismus is the loss of depth perception. The normal brain uses the natural disparity between images that are received from your eyes to “fuse” a complete visual picture. This disparity helps the brain add depth to the complete picture. In strabismus, the images obtained from each eye are so different that the brain is simply unable to put the picture together. Imagine looking at the car in front of you while driving while simultaneously looking at the houses on the side of the street. It is simply too difficult to incorporate those two images. Therefore, the brain separates the images from each eye and loses its ability to “fuse” and therefore loses its ability to have stereoscopic or 3-D vision. Treatment of strabismus in infants before their first birthday has been shown to be vital in order to preserve stereo acuity. The loss of stereo acuity may actually affect children in adulthood by limiting some career choices.

Finally, both large-angle and small-angle strabismus can have psychosocial impacts. Misalignment has been shown to negatively affect self-esteem, as it interferes with normal eye contact, often causing embarrassment, anger, and feelings of awkwardness. These feelings are magnified in the pre-teen, teen, and adult population.

Children may also suffer from one of the most common forms of strabismus called accommodative esotropia. In this condition the eyes cross secondary to high refractive error. The child’s natural farsightedness causes them to activate their accommodative reflex. This is where the brain tells the lens inside the eye to expand in order to help the eye focus. This additional focusing power is directly tied to activation of convergence, or crossing. Imagine looking at something very near your face. In this situation, the eyes naturally cross to keep them both looking on the target. Unfortunately, in children with high hypermetropia (far-sightedness) they must aggressively accommodate in a wide range of distances causing the eyes to inadvertently cross. The treatment for this condition is to provide glasses so the child no longer has to accommodate and then will no longer cross.

Treatment for non-accommodative strabismus typically involves surgery on the muscles to adjust them so that it is easier for the brain to keep the eyes straight. Surgery is frequently paired with patching. The act of patching encourages the weaker eye to work more and therefore strengthen the vision in that eye. Frequently, parents misunderstand that patching is a treatment for the alignment however that is not accurate. Patching helps the vision improve in the eye that has become amblyopic but the natural misalignment will remain. The only way to permanently fix an alignment problem is with surgery. The typical strabismus surgery is outpatient and under general anesthesia. Attention is directed to the conjunctiva which is cut and reflected to reveal the extraocular muscle. Suture is placed at the insertion of the muscle and then the muscle is removed from the eye and replaced at a more suitable position. Then the conjunctiva is closed. This procedure usually takes about 45 minutes and requires about 6-8 weeks for recovery. The goal for any strabismus surgeon is to leave the patient with aligned eyes, good stereo acuity, and excellent vision.