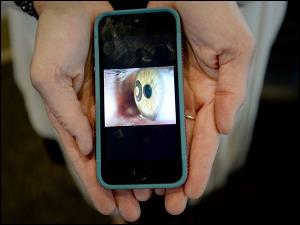 GREENVILLE, SC (June 14, 2016) – As an engineer and an adjunct instructor at Greenville Tech, Roger Moore is always reading reports, documents and schematic prints.

And if he forgets his reading glasses, he’s just out of luck.

Same thing happens at restaurants trying to read the menu. Or in the grocery store checking product labels.

The 53-year-old Greenville man had developed presbyopia, the condition that makes near vision difficult as people age.

It was annoying and inconvenient.

So when he learned of new technology to restore near vision being offered by his eye doctor, he went for it.

And now he can catch up on the latest in the newspaper, peruse the menu at his favorite dining spots, and even enjoy his evening devotionals without glasses.

“I had trouble reading the last four years and I could tell my close-up vision was diminishing, especially when my eyes were tired,” he said. “This is a great improvement.”

Moore had a procedure known as the KAMRA corneal inlay – a tiny black ring implanted in his cornea in front of the pupil of one eye that enables near vision once again.

While LASIK surgery improves distance vision, KAMRA is a surgical solution for presbyopia, said Mary Lou Parisi, CEO of Clemson Eye in Greenville where Moore had his procedure in March.

The inlay, which is FDA approved, is made of biocompatible polyvinylidene difluoride, a thermoplastic fluoropolymer, and is 3.8 millimeters in diameter and about a third the thickness of a contact lens, she said.

During the 20-minute procedure, the eye surgeon uses a laser to make a pocket in the cornea of the non-dominant eye, and inserts the inlay, which works like a small camera aperture to increase the depth of focus, Parisi said.

Afterward, patients use steroid eye drops for a few months, she said, and the brain adapts to having the inlay in just one eye, which continues to have distance vision as well. It generally takes at least a month before near vision is improved, she said.

Because it’s about 0.1 millimeter smaller than the pupil, the inlay can’t be seen in dark eyes, and usually only on an angle in people with light-colored eyes, she said.

And should there be trauma or disease in the eye at some point, or if the patient doesn’t adapt, the inlay can be removed, she said.

The procedure, which is not covered by insurance, costs $4,500, Parisi said.

As with any surgical procedures, there are potential risks.

The KAMRA inlay may not eliminate the need for reading glasses, may cause blurred vision, problems with night vision, double-vision, pain, infection, dryness and other side-effects, according to its developer, AcuFocus Inc. of Irvine, California.

Parisi said the incidence is rare and may be temporary, adding that KAMRA has been used worldwide for more than five years, with more than 40,000 patients in the U.S.

About 12 patients have had KAMRA at Clemson Eye since March, and all are doing well, said vision correction coordinator Victoria Gaston.

Clemson Eye has locations in Clemson, Anderson, Easley and Greenville, but KAMRA is only performed at its new office, Clemson Eye’s Center for Visual Health & Surgery, a 19,000-square-foot, $4 million facility on Pelham Road.

Moore says it’s great to be able to read without glasses.

“It was just inconvenient because you had to have reading glasses at times, and you may not have them with you,” he said. “After (KAMRA), you don’t have to take reading glasses everywhere you go.”

During his procedure, Moore said that although he felt slight pressure, he had no pain. And though it was a bit unnerving to be able to see the procedure being done, he had a tranquilizer beforehand which made it easier.

He spent an hour in recovery before going home with a patch over the eye for about a week, he said. And before long he was able to read the print on the eye drop bottle.

Moore calls it a blessing that technology has been developed that can restore his vision to what it used to be.

“It was a good feeling to know it was successful, first of all,” he said.

“And then, of course, thinking about when you get older, you know your vision is going to deteriorate even more. And this will slow that process.”

Click here to view the full article at GreenvilleOnline.com